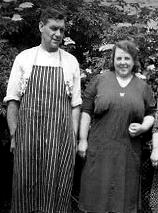 Sam Bright, was what you would call a real character. He couldn’t wait for the moment to tell a story or crack a joke. A soldier, a coal miner, a chef at Blackpool Casino, a fish and chip shop owner, a shopkeeper, a pallbearer, these were a few of his careers.

During the First World War he found himself as a cook, responsible for the well being of his comrades. The meager rations that the army supplied needed supplementing by scavenging. Often he went on ‘raiding parties’, sneaking into French farms, pilfering this and that. He once found himself in a Frenchman’s dovecote. This was nearly his final mission. The farmer gave chase and then leveled his loaded rifle at him. He wasn’t really proud of his thieving but as he explained, it was war and his mates were hungry. One of his most poignant tales was about a march to the ‘front’. In the hedgerow Sam spotted a ham bone which had a bit of meat left on it. They got to the frontline and as the history books tell us conditions were appalling and the rations were low. Sam remembered the ham bone, and on the march back retrieved it from the hedge to use in the next stew. British stretcher bearers recovering a wounded soldier from a captured German trench during the Battle of Thiepval Ridge, late September 1916, part of the Battle of the Somme. (Photo credit: Wikipedia)

The Battle of the Somme between 1 July and 18 November 1916 took place on either side of the river Somme in France – this was where Sam was wounded and lost an eye. He spotted a German sniper who unfortunately spotted him first. He was wounded and his commanding officer suggested that he remained at his post to give his comrades a better chance to fallback, promising his family a medal for his sacrifice. I’m not sure what he said but he was invalided out of service and was treated at Guys Hospital in London, where they patched him up and cosmetically made a fine job. Apparently this damaged eye was assisted by a rabbit’s nerve.(?)

This bloody battle saw the British Army, supported by contingents from British imperial territories, including Australia, New Zealand, Newfoundland, Canada, India and South Africa, mount a joint offensive with the French Army against the German Army, which had occupied large areas of France since its invasion of the country in August 1914. The Battle of the Somme was one of the largest battles of the war; by the time fighting paused in late autumn 1916, the forces involved had suffered more than 1 million casualties, making it one of the bloodiest military operations ever recorded. Read more…

Like Loading...
This entry was posted in Memorials and tagged Battle of the Somme, Guys Hospital, London, World War I. Bookmark the permalink.