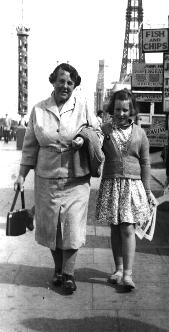 When Mary was in her teens she was apprenticed to a chemist in Sheffield, traveling by train every day from her home.

She was the woman behind the scenes in their grocer’s shop, where they were famous for their home made ‘ice lollies’. People still remember them for their delicious treats, which they made from ‘Tizer’ and other bottles of ‘pop’.

She was a ‘Spiritualist‘ by conviction, with local businessmen and tradesmen alike knocking on her door for advice and guidance, and her ‘messages’ influenced deals and life changes all around her. The respect she had was far larger than her diminutive size. Read more…

Spiritualism developed and reached its peak growth in membership from the 1840s to the 1920s, especially in English-language countries. By 1897, it was said to have more than eight million followers in the United States and Europe, mostly drawn from the middle and upper classes, while the corresponding movement in continental Europe and Latin America is known as Spiritism.